What are “unreached people groups”?

An unreached people group, as defined by the Joshua Project, is “a people group among which there is no indigenous community of believing Christians with adequate numbers and resources to evangelize their people group without outside assistance”.

Having “no sustainable move of the Gospel” means that believers are not able to make disciples or plant churches. Can you imagine having no Old or New Testament Bible in your language? This may be difficult to comprehend in America, we have many Bibles and churches to choose from.

In 2014 – 2015, we realized those in our ministry team were impacting unreached people groups. We wanted to help support a sustainable move of the Gospel among those we could reach. One group, the Fulani, are considered by the Joshua Project as a “frontier people group”. This means that throughout the entire people who identify as Fulani, very, very few have probably ever heard of Jesus at all. Of the resources available to reach people with the Gospel, only a really small fraction goes to reach the Fulani, and other “frontier people groups”. West Africa has a moderate number of “frontier people groups”. To learn more about Frontier People Groups, you can click HERE to go to The Joshua Project website.

How Can We Determine What To Do?

Many Christians ask, “What is God’s will?” The Bible clearly points out in 2 Peter 3:9 that “The Lord is not slack concerning His promise, as some count slackness, but is longsuffering toward us, not willing that any should perish but that all should come to repentance.” Too often evangelism efforts are brought by the word of men, but the Bible shares the provision God has given us in this simple statement from Romans 10:17, “So then faith comes by hearing, and hearing by the word of God.” We have determined to make this our reasonable goal to reach the lost: to steward the resources God has given us toward empowering others to “finish the task”.

The Joshua Project has valuable and useful data collected all over the world concerning the “remaining task”. If you haven’t already checked out the link above, we encourage you to do so. 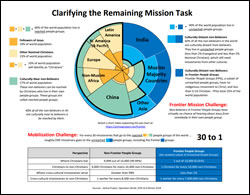 Since 2013, we have supported ministry leaders and evangelistic outreaches among these three unreached people groups:

For more detailed updates about each of these indigenous peoples, and the impact of our ministry among them, click the map below.