March 2008
Imagine a sub-zero morning at the beginning of March, perhaps -10 degrees. Our day in South Dakota started like all the other workdays. We met in the kitchen after dressing for work to chat a bit before heading out. David told me of an incident that happened to him overnight, yet he didn’t sound too concerned about it. He had passed out by the front door when he got up about 3am to let the cat outside. This alarmed me very much and I urged him to go see our doctor. We both went out the door about 8am.

I worked at the hospital at the time, and received a call from my supervisor at about 1:30pm, telling me my husband was in the emergency room. I thought, “good!”

It wasn’t good though, doctors could not figure out what was wrong with him. I rushed over to the ER and found David alert and oriented. A few hours later I watched his blood pressure tank to 33/18 and I cried for help! The next time I saw David, in the ICU, he was in a coma, had 18 things hooked up to him, and the doctors each told me they did not expect him to make it through the night.

It was a surreal vigil, and it was very late at night. I had only the Lord to talk to. About 3am I had something like a vision…

David did make it through the night, and was life-flighted to Minneapolis, MN still in a coma. I did not know one soul there but my friend called Calvary Chapel St Paul and arranged support and help for me. One young woman was an amazing sister/mother/daughter/friend throughout this whole ordeal; Raina. She picked me up from the airport, brought me and my family into her home, cooked for me, shoveled snow, drove me back and forth from the hospital, took me to church, prayed with me, held me while I cried, stayed with me in David’s room, and prayed over it all.

A week later, I asked the pastor and his wife to come and meet my husband, and pray with us. Pastor Chik and his wife, Kimberlee came later that evening. Raina was also there. As Pastor Chik prayed over David, he said, “Lord, if You have no purpose left for this man, I pray You will take him home to be with You. But, if he still has a purpose, I pray You will heal him and restore him for that purpose.”

TEN minutes later, as I held his hand and we talked by his bedside, my husband WOKE UP! 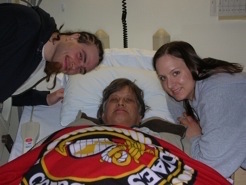 That night, in the ICU, my husband’s nurse was a woman from Sierra Leone.

Two days later, when I arrived in the morning, I found my husband had been extubated (breathing tube removed). The first thing he said to me was, “Roseann! We’re going to go to Sierra Leone someday!”

“Great! Where is Sierra Leone?”